2019 has been a bit of breakthrough year for wearables that work in the water. Yes, we’ve had swimming watches for years and now most smartwatches and fitness trackers are well equipped for a dunking in the pool or open water.

Now though we are seeing wearables in different form factors that are offering something new and, crucially, useful for swimmers of all abilities. Form impressed us with its AR swimming goggles, and we’re still putting the Instabeat through its paces, which is bringing visual real-time heart metrics to regular swimming goggles.

We know that building wearables is hard, but ones that need to work exclusively in the water are undoubtedly even harder to make a reality.

Incus Performance is another startup on track to launch its system with a wearable at the heart before the end of 2019. We spoke to Chris Ruddock, lead engineer and managing director at Incus Performance back in April. We learned the story behind the Loughborough University-based team and its ambitions to build the ultimate wearable for triathletes.

Now we’ve had the opportunity to get into the water and see exactly how it works, and discover whether Incus could help us understand how to be a better swimmer. 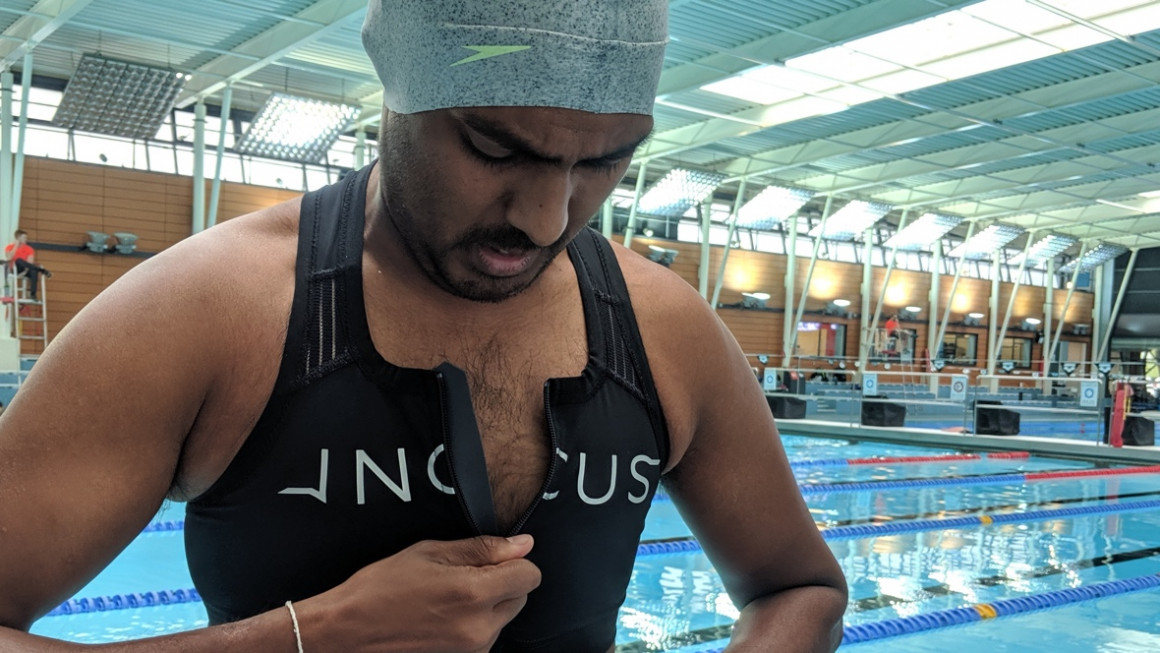 As Ruddock tells us, it doesn’t like to think of this as just another tracker. The wearable is part of an entire analytics system it has built to interpret the data collected by its device.

The Nova, as it’s called, is almost fin-shaped in design and houses motion sensors like accelerometers, gyroscopes and barometers to track your swimming and produce some familiar and not-so-familiar metrics. It also includes a slither of an LED down the spine that illuminates green when it’s ready to start tracking.

A built-in haptic vibration motor give it the power to be used to offer physical sensing alert if you want to know when you’ve hit a certain distance in your swim or your technique is faltering. 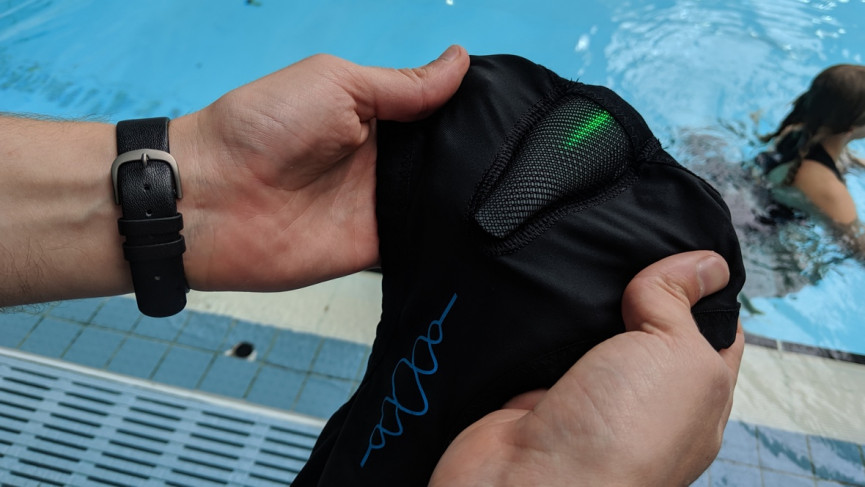 That smallish device sits inside the top of apparel (at the upper spine) that Incus has also designed. It’s already developed triathlon suits that are compatible with the Nova too.

The apparel we got to try on can probably best be described as like one of the compression vests that footballer’s wear to monitor their performances on the pitch. You put it on like a lifejacket and then there’s a zip out in front to pull up and secure it.

Ruddock says fit is everything as the Nova device needs to be held closely (but not too tightly) to the body to ensure it can effectively measure movement in the water. You need to ensure you have the right size to make sure water doesn’t leak in as well and I had to swim a couple of lengths to ensure that wasn’t an issue.

Ensuring that people get the right fitting apparel is certainly going to be a challenge for Incus when it finally goes on sale, and it’s something the startup is well aware of and says it will be closely monitoring.

But it’s fair to say that if you’re a well toned swimmer, you’ll have no problem pulling this off. If not, well, it’s not the most flattering. Especially, when you’re likely to have to go with a size smaller than you imagine you need.

Crucially though, it delivers where it matters most: not feeling obtrusive in the water. It didn’t feel anything like donning a wetsuit, and it wasn’t restrictive or uncomfortable in any way. 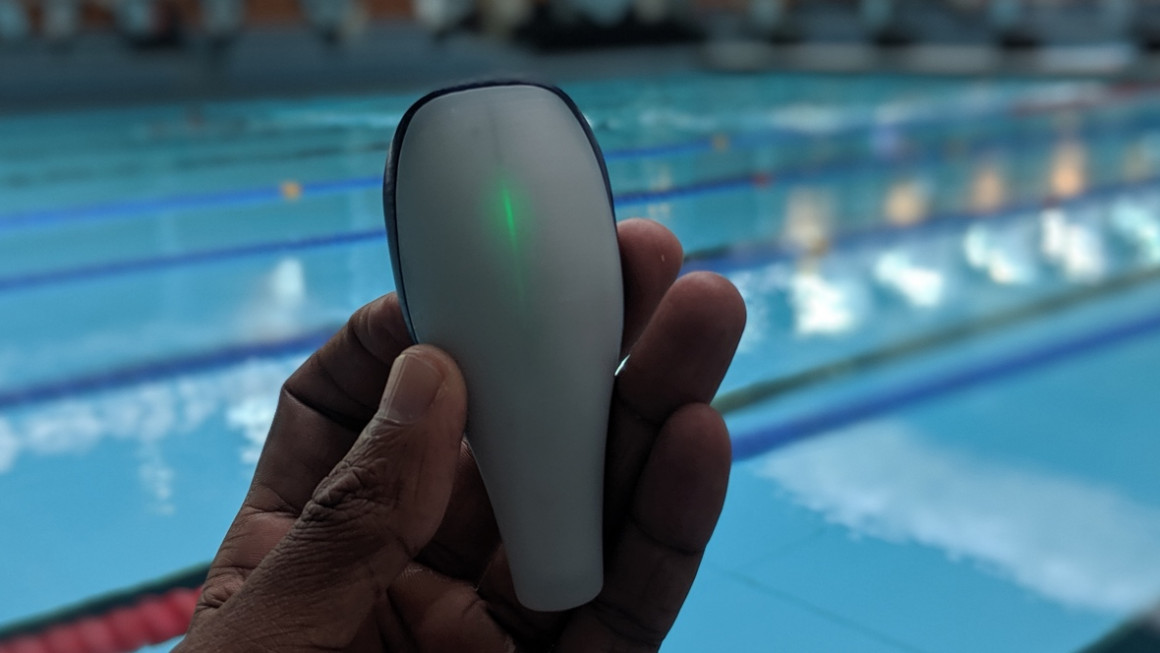 With the apparel on and the sensor in place, there are a couple of ways to get your swimming session started. The easiest is to hit the button on the side of the Nova wearable and just go swimming. When you’re done, you can sync that data and review it on the web, tablet or phone app.

The other option is to pick a session that’s more structured from within the app and the get into the pool. That’s where features like the haptic alerts come into good use.

In our time, we simply hit that button and put in some lengths in the pool. We say simply hit the button, but it was quite tricky to locate and we did have to get some assistance with that.

It feels like it would be more natural to have that button on the front of the device as opposed to the side, though we imagine there were design reasons for doing it this way.

When it’s time to go, you simply swim, finish up and sync. That’s it. As we said, you quickly forget about the fact you’ve got this hugging apparel with the sensor inside on.

I’d be interested to know if that’s the same after a significantly longer session in the pool, though Incus has tested this with some of the best swimmers in the country and says it’s had no complaints so far.

Wading through the murky metrics 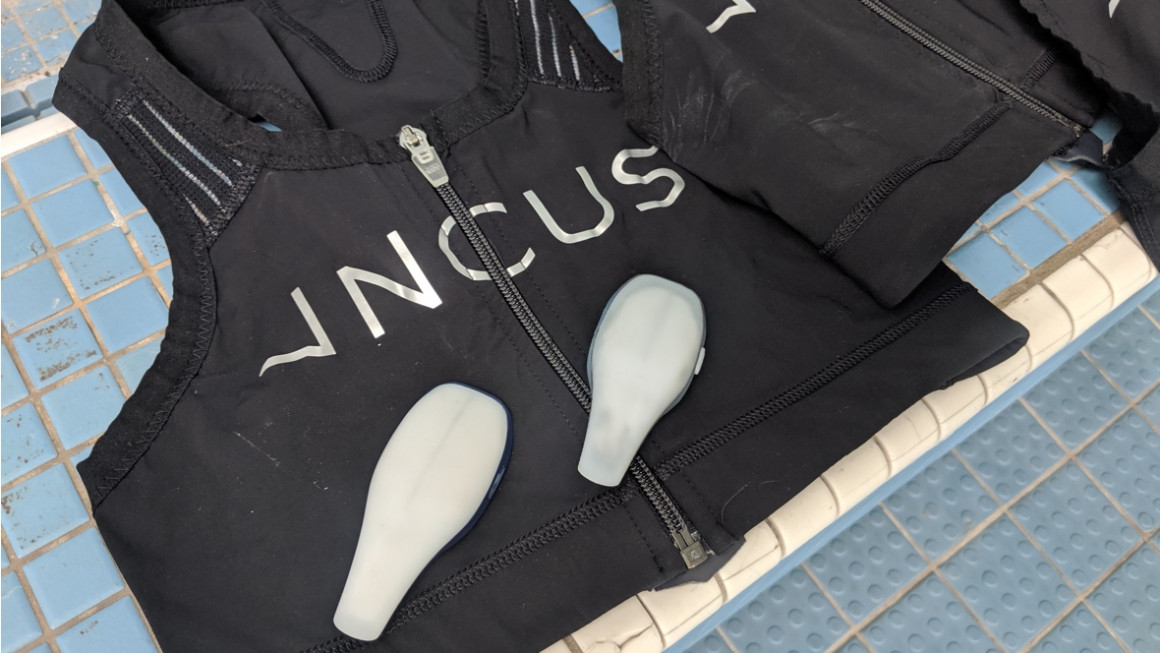 Incus Performance is pitching its device for swimmers of all levels. With Loughborough University as its base, it has access to some of, if not the best swimmers in the country. But it’s also been testing it with the non-pros like me.

The aim is that everyone that wants to be better and can be by having that extra hit of data that they can understand. So what exactly is that data? Incus’ wearable will track distance covered, duration, average pace, stroke rate, swim time and split time. Some of that is standard fare for wrist-based swim tracking, though the accuracy and reliability of that data will always be open to debate.

It’s when you get into the unique metrics that Incus aims to offer above other swimming wearables, and where things get really interesting. The first is something it’s calling Velocity Gain. At its essence, this is a bit like the power metric used in cycling as a way of offering an objective measurement of output in the water. 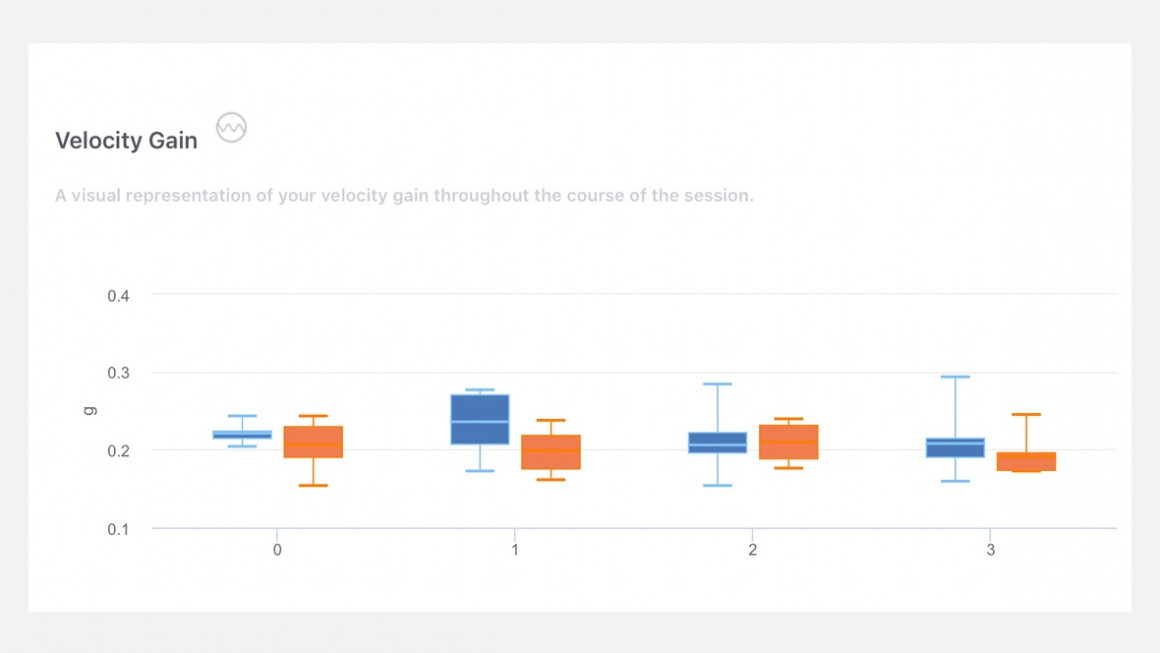 With the ability to measure body angle, stroke and other data, Incus can see how far you’ve moved through the water. It’s not about how long you took to finish a session, but revealing the story of how you got there and that’s what it hopes to achieve with this metric.

From my session, that Velocity Gain is represented by blue and orange blocks that represent my left and right side. The size of the blocks indicate that gain in the water and you’re essentially looking for blocks on your left and right side that are similar. In my data, it indicated fatigue as I moved slower in the water and stroke technique may have started to falter. 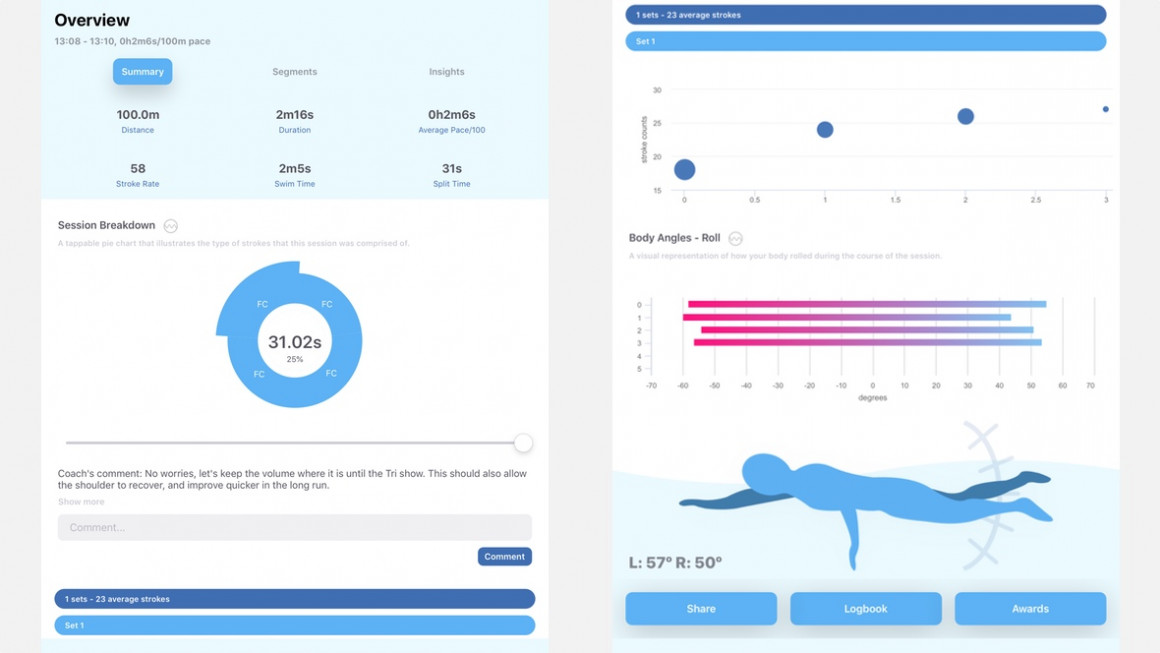 The other big metric is Body Roll. This is again related to technique pinpointing areas to help you move faster in the water. It is essentially telling you how much your body rolled or rotated within your session.

When you perform a stroke your shoulders, torso and hips rotate or create that body roll around the long axis of the body. The idea is that rolling or rotating the body should be evenly balanced and your head should remain stationary.

So in our data, it showed that our body rolled slightly more to the left side. It’s suggested that could be linked to the fact that I breathe on that one side as opposed to bi-lateral breathing (breathing on both sides). Working on performing that bi-lateral breathing could help create that more evenly balanced body roll and effectively help move through the water quicker.

None of those insights and interpretation of the data have come from me, but the instructor that’s taking me through my data. I’m a competent swimmer, but I do not have a coach and it’s fair to say without one, it would’ve been difficult to decipher that information and know how to improve my technique.

Ruddock says that making this data useful to swimmers of all abilities is paramount and is offering ways to customise the UI in its apps. It will also include questions in the preliminary stages of setup to get a better sense of the level of the swimmer and the data they actually will find useful.

Incus has come up with something that is truly innovative in the swim tracking space. It’s offering metrics and data points that you can’t find on your standard sports watch, positioning a wearable on a part of the body that it says can take more reliable measurements.

When it’s added the functionality to support running and cycling too, it will have one of the very few setups specifically built for triathletes. With prices starting at £319 (for the device only) and additional monthly subscription model offering additional insights and personalised analytics, it’s certainly not a cheap setup.

But we imagine there are many in the triathlete community that would be to happy to spend if it promises to improve their performance and have even more data to pore over.

In its current form, the apparel feels comfortable, the data feels unique (and insightful), but I can’t help thinking that to get the most from Incus you’ll need to have a coach that can put that data to good use so you know where to go next.