Huawei could be prepping an unveiling of a new smartwatch after images were shared showing off what could be the Huawei Watch GT 2.

WinFuture seems to have got hold of what are apparently marketing images of what may be the successor to the Watch GT, which launched back in 2018.

The images suggest there will be a couple of different looks, which would mirror Huawei’s decision to launch Elegant and Active editions of its Watch GT earlier this year.

The back of the watch reveals that it will be waterproof up to 50 metres depth once again and there will be a heart rate monitor in tow with a similar sensor array. Apparently new features include a microphone and speaker, which would give the watch the ability to make and receive calls. It’s safe to probably assume that GPS will be on board just like the first Watch GT too. 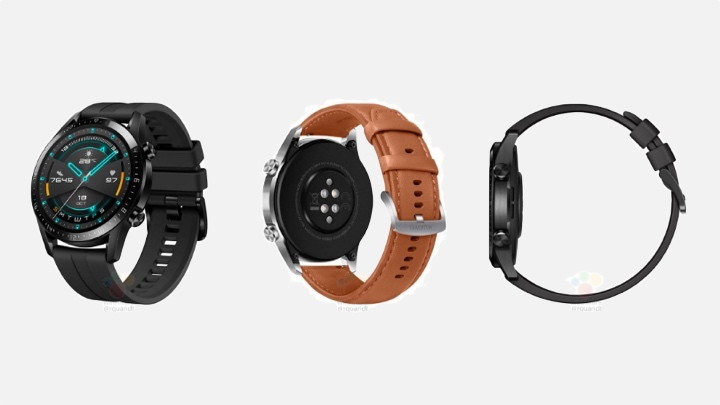 One of the most appealing aspects of the Watch GT was the big battery life and it sounds like things will get better. The new GT will apparently jump up to a 445mAh battery to help it track longer. That’s slightly up from 420mAh one included in the first Watch GT.

There will of course be big question marks over what software this new Huawei smartwatch could run on. The first watch ran on the company’s own Lite OS, which previously only featured on its fitness trackers. It’s suggested it will continue to run on an updated version of that OS. Huawei though recently revealed HarmonyOS, its operating system alternative to Android, would run on smartwatches. So maybe we could be looking at our first Harmony OS-running smartwatch.

With IFA about to kick off, we might not be too far away from finding out if these pictures are legit and we’ll have another solid, sporty watch from Huawei to get some play time with.