We first heard about Vive Cosmos back in January and since then, HTC has been drip feeding us details about its latest high-end headset.

The Cosmos starts shipping on 3 October for £699 and replaces the original Vive, which will now be retired, leaving the Cosmos alongside the more developer-facing Vive Pro.

Read next: The best VR headsets to buy

There are also new illuminating controllers, while a new vented front aims to keep your faces from getting too sweaty in VR; you can flip it up for moments you need to temporarily jump back into the real world.

While the basestations are no longer part of the equation, the headset still needs to be powered by a PC or laptop. You can go untethered via wireless adapter, but that’s sold separately. Contrary to the initial rumours, it doesn’t have the capability to run on a mobile device.

So, on paper, there’s everything to suggest the Vive Cosmos is another headset to show VR off at its best. Though based on our first play with it, that’s not exactly the impression we were left with. 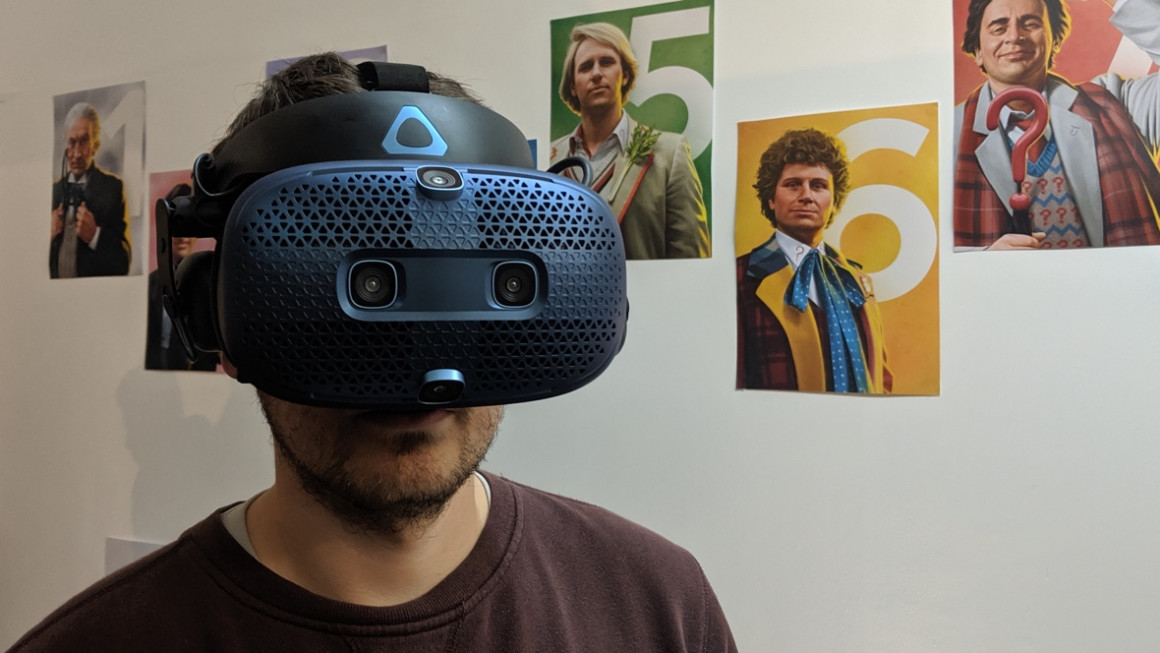 Slipping that more eye-catching metallic blue headset on, the Vive Cosmos felt an awful lot like an Oculus Rift S or Rift Pro from a comfort and fit perspective – that’s a good thing. The cushioning is solid, and glasses can fit relatively comfortably in the headset provided you fit it with some care. You’ve got a dial to the rear of the headset to control tightness, and one under the visor to change that side of things.

It also comes with headphones, which are more elegantly built into the body of the Vive headset than they are on the Vive Pro. While we couldn’t get a full sense of their potential in the demo room, audio and dialogue were perfectly clear, though it will be more interesting to see how it all performs in the confines of our own VR space at home.

HTC says that the Cosmos has a new cooling system to keep air circulating to your face, although the headset still left us feeling a little hot and bothered even after a short VR demo lasting around 10-15 minutes. 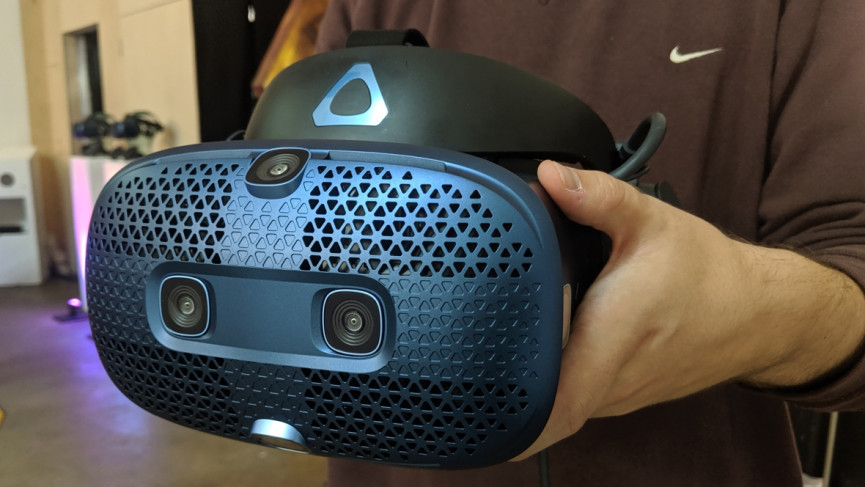 The Cosmos also has an intensely sensible addition: the front of the visor can be flipped up at any time to see the environment around you in the real world. This is a great solution to the issue of being stuck in your headset if you need to quickly see something that’s actually happening.

Though how slick or necessary it is up for debate. The passthrough camera on Oculus’ headset feel like a more helpful solution to helping you be more aware of your actual surroundings.

Taking the new controllers in hand also brought an interesting distinction – they might look all-new, with those distinctive jagged white-light zigzags around them, but the controllers also didn’t feel all that novel to us.

You’ve got all the same buttons and triggers as the Vive’s existing controllers, and for those who aren’t familiar it can be difficult to remember which button is which without flipping up that visor. Still, they’re sturdy and comfortable in the hands, which is what matters, and those diagonal lights help the headset to track them accurately. 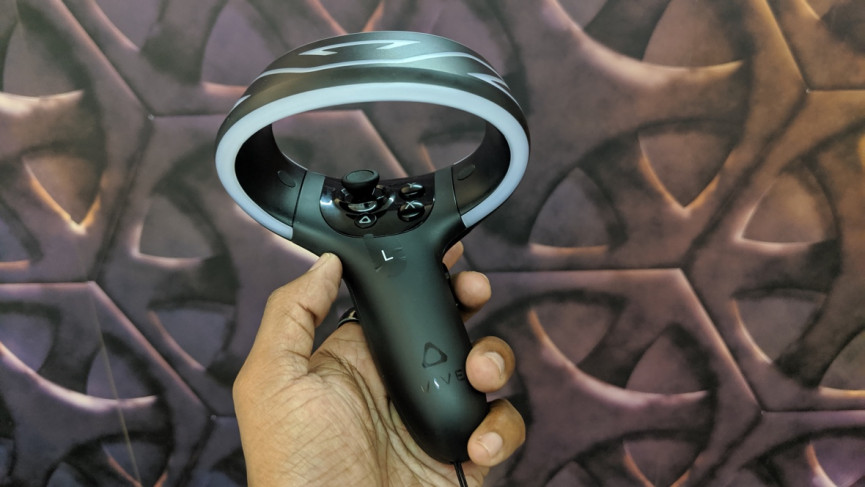 We were able to put those controllers to use in Doctor Who: The Edge of Time, a VR game set in the time-melting show loved by Whovians everywhere.

The demo starts in the famous Tardis, with a hologram of the latest Doctor, played by Jodie Whittaker, explaining a fairly incomprehensible crisis to us. In short, we had to restart the Tardis through a series of those nozzle-twists, switch-flicks and lever-pulls made so quickly on the TV show. This was a good chance to get a sense for the control offered by the Cosmos.

We’ll clarify at this stage that it’s always hard to know where software of hardware is at fault, and we’ll hold out full judgement until we get longer with the Cosmos, but picking things up and interacting with items in The Edge of Time with these new controllers was very clunky.

The tracking of our hands’ positions felt strong enough, but the distinction between what we were trying to touch, when those items were close together, was consistently a little off. That translates to frustration, in the moment, and stands in contrast to, for example, the Oculus Rift S, which offers excellent control. 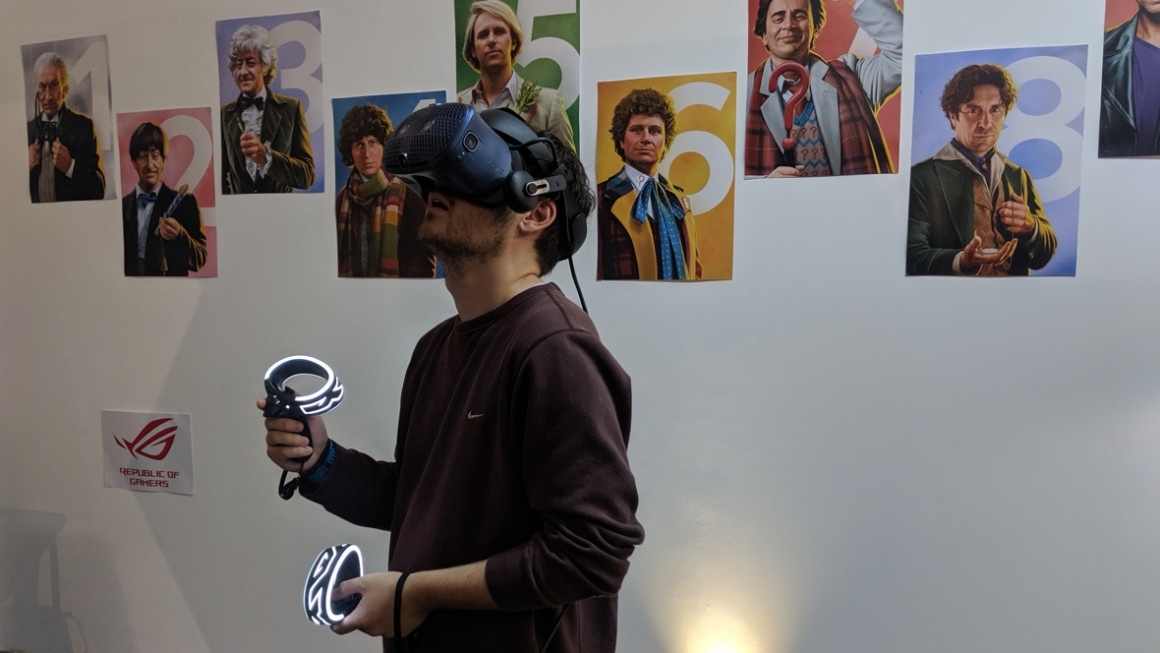 So HTC makes some big claims about what to expect from the Vive Cosmos in the graphical department. It says games will run at a 90 frames per second, and that its RGB panels, which use subpixels for improved clarity, will reduce the screen door effect that plagues some headsets.

This demo didn’t do the best job of giving us an indication of how much better the visual performance is in the Vive Cosmos. We know, theoretically, that the Vive Pro is still the most advanced of Vive’s headsets, but that the Cosmos is pretty close to its specs.

We also know that if you haven’t used a new headset for a few years, the Cosmos will feel like a step forward. But, taking only what we saw from The Edge of Time into account, the visual crispness didn’t blow us away compared to efforts from Oculus. 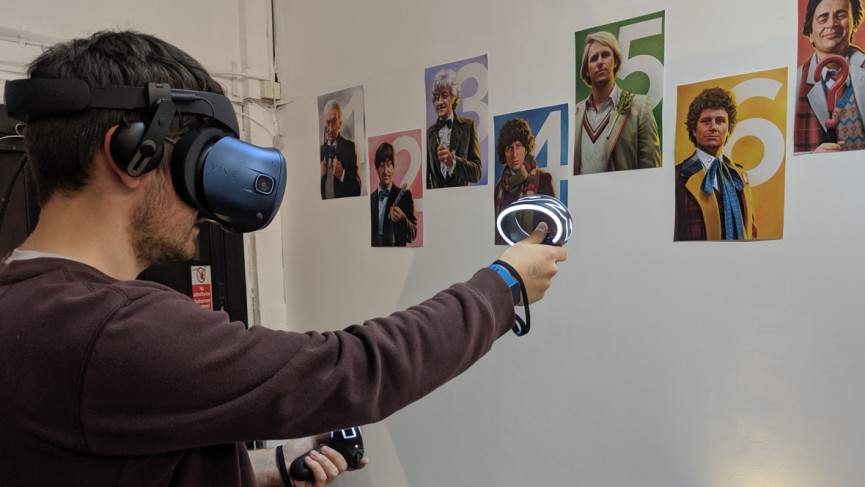 That said, if you’re coming straight from the original Vive as your only reference point, you’re going to be impressed by the jump. The resolution has been bumped by 88%, the sort of margin that you can’t miss.

Again, we feel like the limited nature of the visual quality we saw was likely down to the demo rather than the hardware. We saw the inside of the Tardis, which looked good enough, and decently crisp up close, as well as a wooded location where we wandered through some gulleys and solved a switch puzzle.

It was, in a word, muddy. The contrast between colors wasn’t all that great, and something about the bloom lighting in use was more than a little blurry. 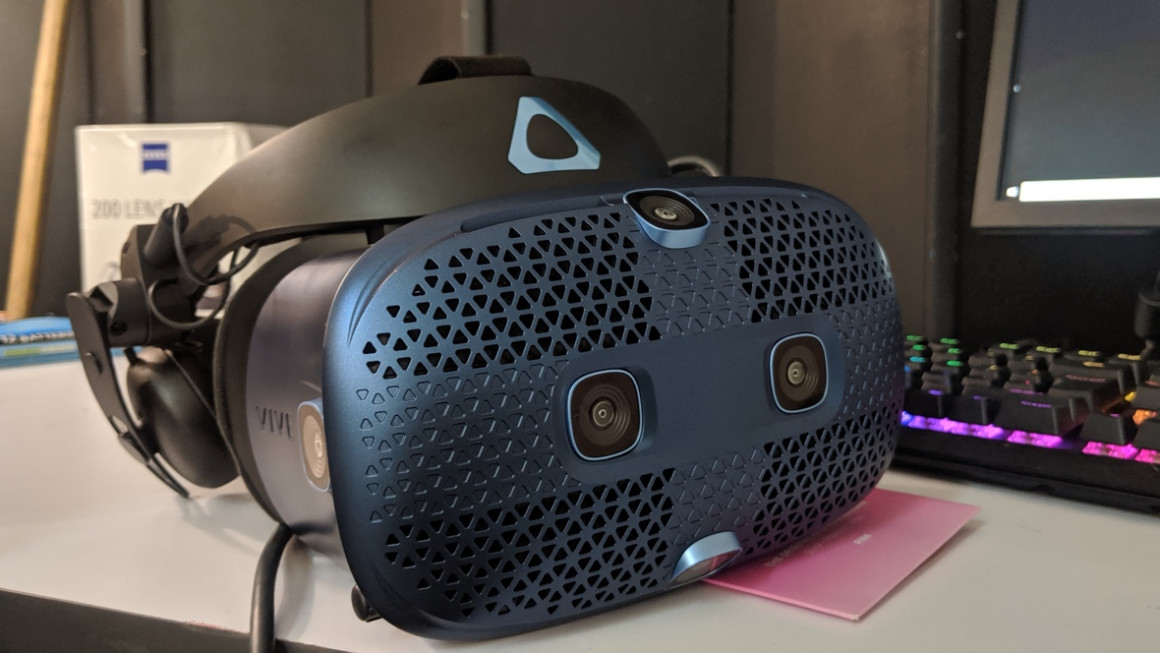 It’s getting to the point where you know what to expect from a Vive VR headset – the build quality and software is all polished to a sheen.

The HTC Vive Cosmos is no different – it fits well, looks like it has an easy setup process, and in sheer resolution terms is hard to deny.

The fact is that Doctor Who: The Edge of Time might not live up to those standards, and certainly didn’t do the best job of showing off the new hardware. It’s coming out for Oculus Quest, Oculus Rift S, PlayStation VR, HTC Vive and Vive Cosmos, though, so some cross-platform compromises may have played a part, too.

Overall, we’d say that the Cosmos looks like a solid, if not jaw-dropping upgrade to the Vive line, and at £699 may well become the default choice for loyal HTC users who don’t want to shell out for the more expensive Vive Pro.

We’ll be getting our hands on a headset when it releases, though, to put it through its paces more fully, so check back for our final verdict in the weeks to come.