It’s been a long time coming, but Garmin has finally launched a smartwatch to take on the Apple Watch. Garmin Venu is the company’s first smartwatch with a full AMOLED touchscreen display – diverting away from the basic LCD screens that have adorned its previous watches.

But the Venu is still a very Garmin watch.

If you were expecting to see the company go all-in with Wear OS and jump into bed with Google, you’d be mistaken. It’s translated the experience of a Fenix and Forerunner watches into a glossier, touchscreen smartwatch package – but left the mechanics nearly identical. 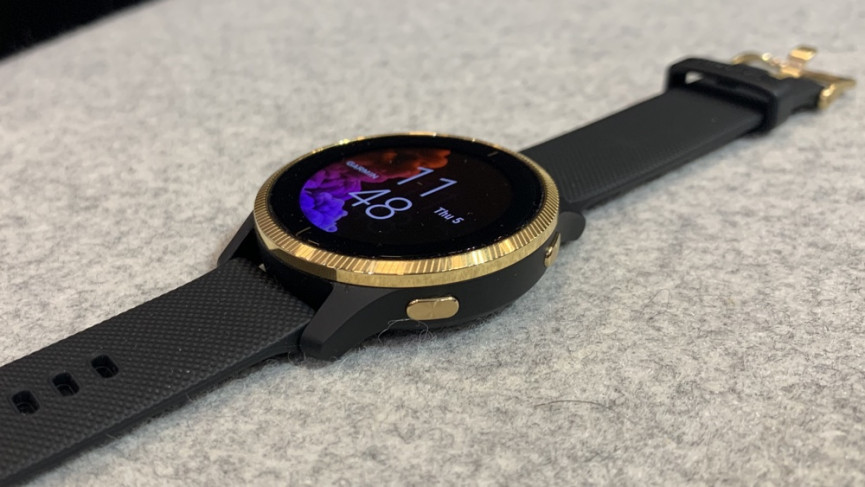 With a round face the Venu will be manna from heaven for those who covet the traditional timepiece shape.

The metallic bezel has a lovely detail which goes some way to a unisex design – and stops the Venu becoming a lifeless hunk of black plastic, though we do wish there was less of it. You can choose rose gold, gold, silver or just black.

It’s also impressively thin and light. It’s not adorned with a metal case or any unnecessary fat. It’s a pretty middle-of-the-road 43mm case size – and the Venu comes in one form factor. It felt comfortable on our small-ish male wrists, and if you feel like a standard Forerunner is an acceptable size then the Garmin Venu will be no problem.

The screen is a 1.2-inch AMOLED number, which did the job without being especially dazzling. It’s on par with the Fitbit Versa 2 from a quality standpoint, and the 390×390 resolution is none too shabby when you consider the five days of battery life. 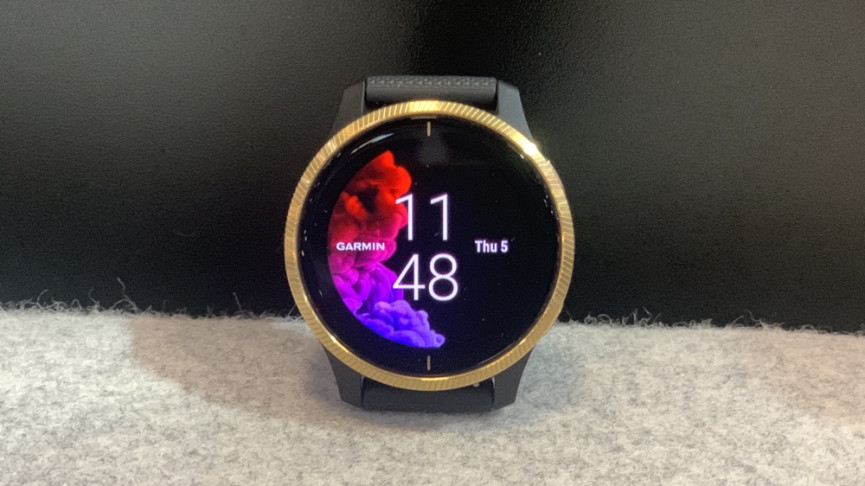 As you’d expect, the revamped OS goes big on colour, using plenty of green and red to help you navigate. Anyone who’s used to a Garmin will recognise a lot of the interface, and there’s been quite a literal translation in places.

That’s fine – but one thing we didn’t get to see was how smartwatch features such as texts and notifications take advantage of the sharper screen – and what that experience was like. That’s something for our full review.

You get a silicon strap, which pretty anonymous, but the buckle is co-ordinated to that of the buttons and bezel on your chosen watch. The strap can also be swapped out.

There are two physical buttons at 2 o’clock and 5 o’clock. One seems to mimic the main button on a standard Garmin to summon the sports menu, and the second is a back button. The OS blends the use of these buttons and touchscreen, with swipes and presses to get you around the OS.

We’re sure that anyone spending more than a few minutes with the Garmin Venu will get used to this mix – but we did find it confusing as we tried to summon some of the menus.

The interface was also a little sluggish too, and we’d like to see that made a little more snappy for a final release, when the watch hits wrists later this month. 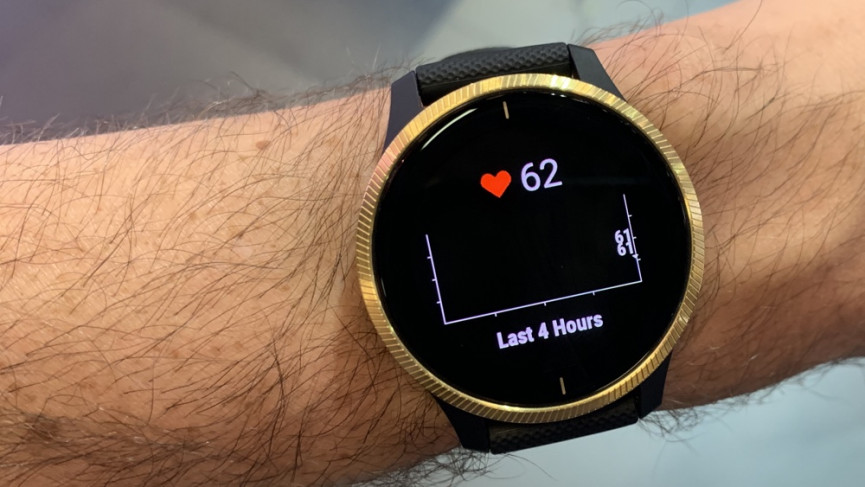 As a smartwatch, it’s pretty much on par with the Garmin Vivoactive in terms of tracked sports and the metrics you’ll capture. And the most hardcore of athletes will still need to choose a dedicated Forerunner or Fenix over this jack-of-all-trades.

It’s an experience that’s very close to the Versa in terms of visual style – but this is very much a Garmin.

The main button summons 20 sports out of the box with running, indoor running, swimming (yes, this is 5ATM water-resistant like all other Garmin sport watches) cycling, yoga, paddle boarding all available. It’s also Garmin Connect IQ friendly, so you can add apps for more specialist activities.

Another one in the eye for the Fitbit Versa is the presence of proper on-watch GPS for the accurate tracking out outdoor runs. Fitbit’s smartwatch relies on piggy-backing off your phone’s GPS, which ain’t so great.

Garmin will give you 6 hours of GPS tracking too, which will see most users fine – although given it will last 5 days as a smartwatch, we thought might be more. 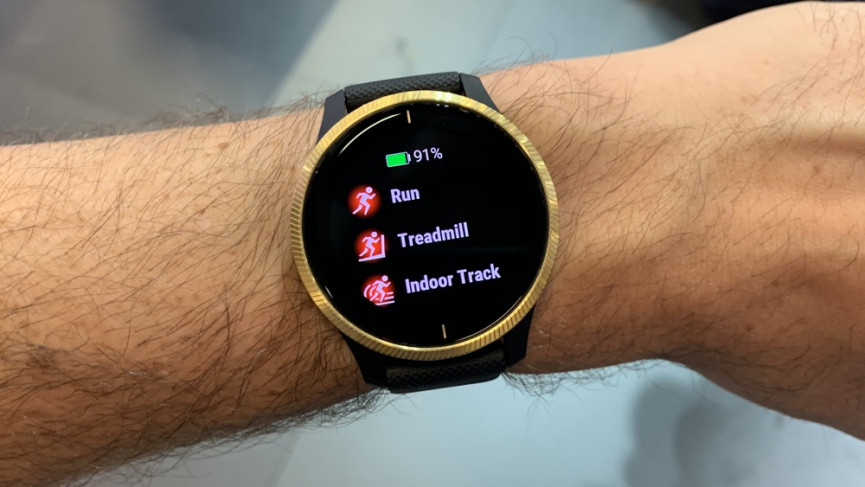 That battery life is abetted by a pretty snappy screen dimming that turns off the display when you’re not using it. Garmin told us, however, that you can activate an always-on display – although battery life will take a hit. How much? We’ll have to find that through testing, though it was hinted that might be around two days. We do approve of being given the choice, and it’s important to remember the Apple Watch will only last two days with the screen off most of the time.

We were also shown some of the guided workouts. We tried a quick yoga programme, which was started via the watch – where a new Workouts menu option lives. Within this we chose a programme that used a countdown timer for each yoga position, and you could swipe to see an animated example of the move.

It was pretty neat, although again required some heavy swiping which left us a little lost at times to which menu we needed.

How does it stack up?

The headline features are a five-day battery life, a touchscreen display and all the sport and HR features you’d expect from a Garmin. It’s a potent mix, and let’s make no bones about it – this now goes head-to-head with the Apple Watch and Fitbit Versa.

The Venu owns the Apple Watch’s single day battery life – a space where the Versa has been able to make an impression. And, of course, it’s iOS and Android compatible. So there’s no reason why it can’t take some market share.

What’s more, with its built-in GPS, huge array of tracked sports and round screen, it also wins points against the Versa too for runners and cyclists. And the advanced sleep features and female health tracking mean it’s no slouch when it comes to wellness either. Fitbit will have its hands full with the round and sleek Venu.

However, we have to talk about cost. The Garmin Venu its set to cost $400 – putting it around the Apple Watch Series 4 and Galaxy Watch Active 2 – and in a different league to the wallet-friendly Versa. And that might squander some of its potential to buyers who aren’t yet part of the Garmin club. 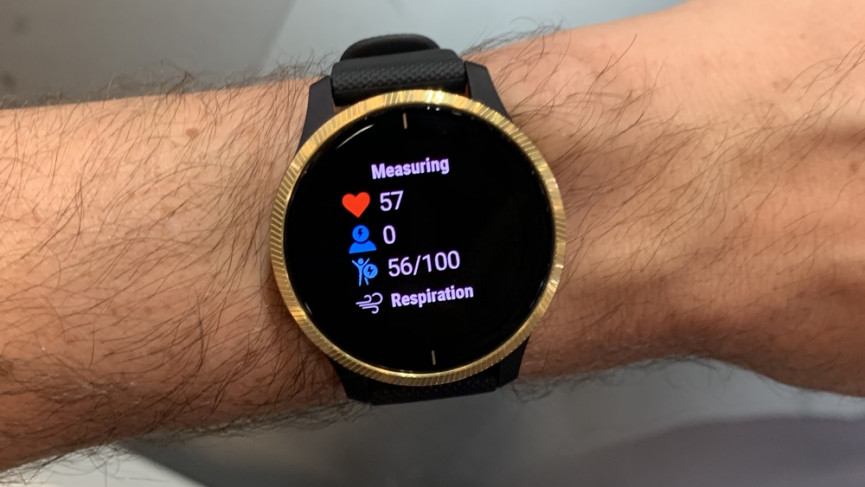 We’ve long waited for a proper smartwatch from Garmin – one that doesn’t compromise on design, battery life and smart features. And in this respect the Venu hasn’t disappointed.

The Venu looks like an accomplished sports smartwatch that should make anyone considering an Apple Watch or Versa sit up and take notice.

Of course, this is early days for Garmin. It doesn’t have the support for its Garmin Pay service that Apple enjoys, nor the same developer support for an app ecosystem that can really do the screen tech justice.

Parts of the Venu feel like a traditional Garmin with a shiny screen – so we’re looking forward to testing how this evolution in screen technology can be made to enhance our fitness lives beyond just a better-looking experience.