The Fitbit Ace 2 is the company’s second fitness tracker that’s made for kids. With its first foray into making wearables for little ones, Fitbit’s Fitbit Ace was a hit with my eight-year-old niece. Though while she liked it on the whole, she did also have some very valid criticisms.

In its second iteration, the Ace 2 has addressed some of her biggest concerns, most notably the added waterproofing to help make the new Ace a truly 24/7 tracker. This time Fitbit has also opted for a more fun design while keeping core tracking features largely the same, and throwing in a few extras like clock faces and goal celebrations.

Fitbit has also widened the age range that its kids’ fitness tracker is suitable for, with the new Ace 2 for ages 6 and above. That’s a drop down of two years from the first Ace.

That’s not the only thing that’s dropped down either. The Ace 2 comes in at $69.99 which is around $30 cheaper than the original.

So has Fitbit made a better fitness tracker for kids or is the Ace 2 simply a modest upgrade to the original? It was time for my niece (now one year older) to step up to the plate once again to help me find out. Here’s our full verdict on the Fitbit Ace 2. 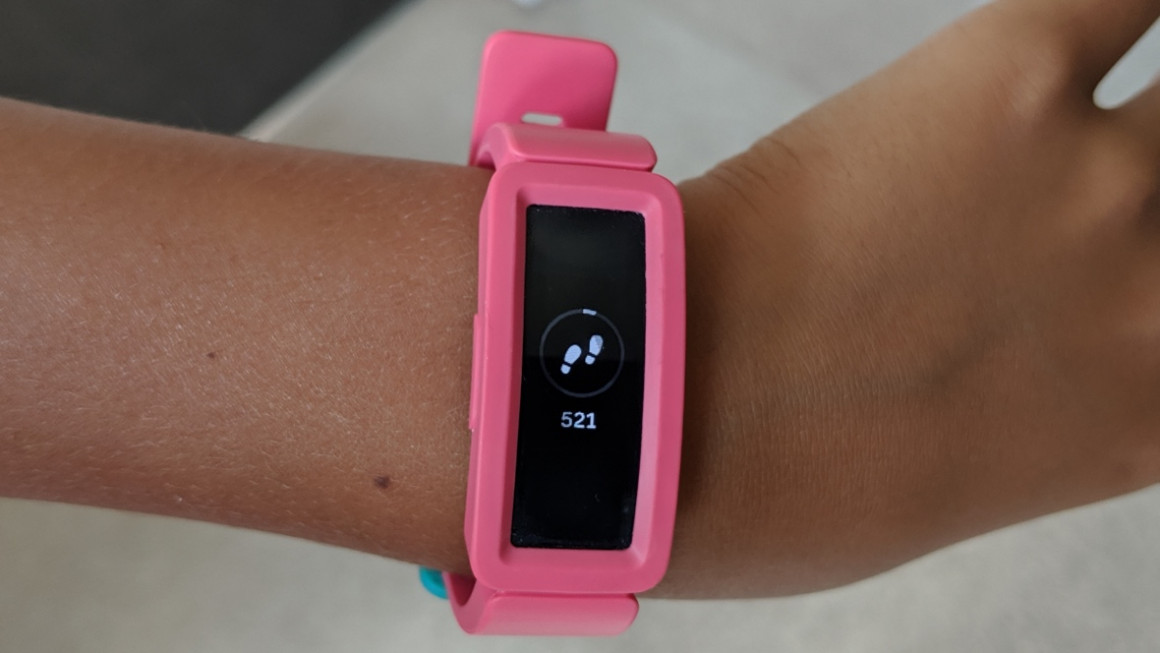 While Fitbit decided to ape the now-retired Alta for its first kids’ fitness tracker, it’s taken a slightly different approach for the Ace 2. There’s definitely a more playful feel about the Ace 2, with some design changes that make it better suited for smaller wrists.

I’ve already mentioned the new swimproof design, which Fitbit has been gradually rolling out to all of its wearable family. There’s no swim tracking here, although that’s hardly surprising when you consider the price point. It carries the same waterproof rating as Fitbit’s other devices (up to 50 metres) and while my niece wasn’t planning to reach those watery depths, just having the ability to keep it one her wrist for longer was a big win.

The new colours (which Fitbit says were picked out by kids) proved a hit too. You have your pick of a watermelon band with a teal clasp (pictured) or a night sky (blue) with neon yellow clasp. Fitbit does also offer a bunch of other colours with its additional Classic band range, and two more with its slightly more expensive Print band. These new looks certainly help to make the Ace 2 feel more designed with kids’ wrists in mind. 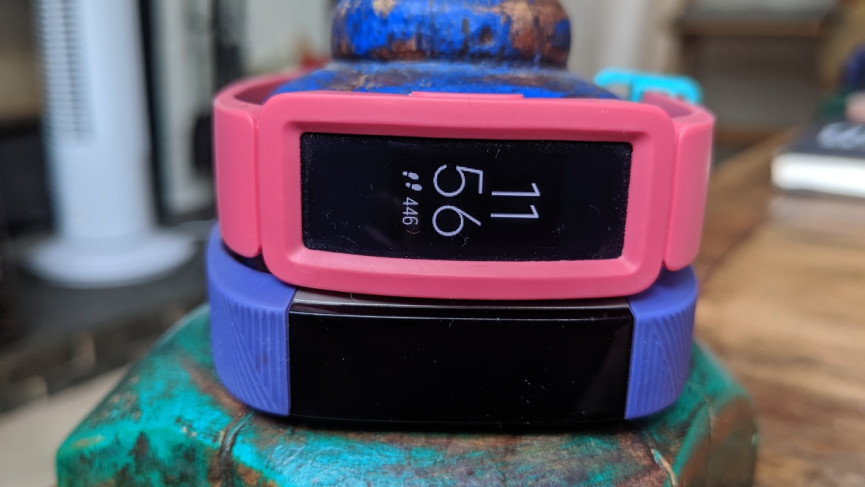 While Fitbit has moved away from mirroring the look of its grown up trackers, the touchscreen is the same greyscale OLED one you’ll find on the new Inspire and Inspire HR wearables. That means you get bigger, bolder icons with the same gestures to navigate data screens. There’s also just a solitary physical button, which is a design change that Fitbit says helps simplify the process of interacting with its devices, and it’s definitely something my niece appreciated having.

There is another reason Fitbit has adopted the same screen as its adult wearables, and that’s because that core module is able to slip into bands designed for Inspire trackers. The idea is that as that Ace 2 owner grows up, they might not want that cartoony band anymore. Even the more playful UI can be adjusted in the companion app to make things feel more like the adult trackers.

Another big plus is the clasp that keeps the tracker around the wrist feels better suited to small hands. While my niece had no problems putting on the first Ace, it proved a bit more tricky to take off. That wasn’t the case with the Ace 2.

Also new with the Ace 2 is the screen bumper that adds an extra layer of protection. I can’t say my niece did too much damage to the first Ace, but the bumper no doubt comes as a welcome addition for those all-action kids, and doesn’t add much additional weight.

Fitbit Ace 2: Getting set up 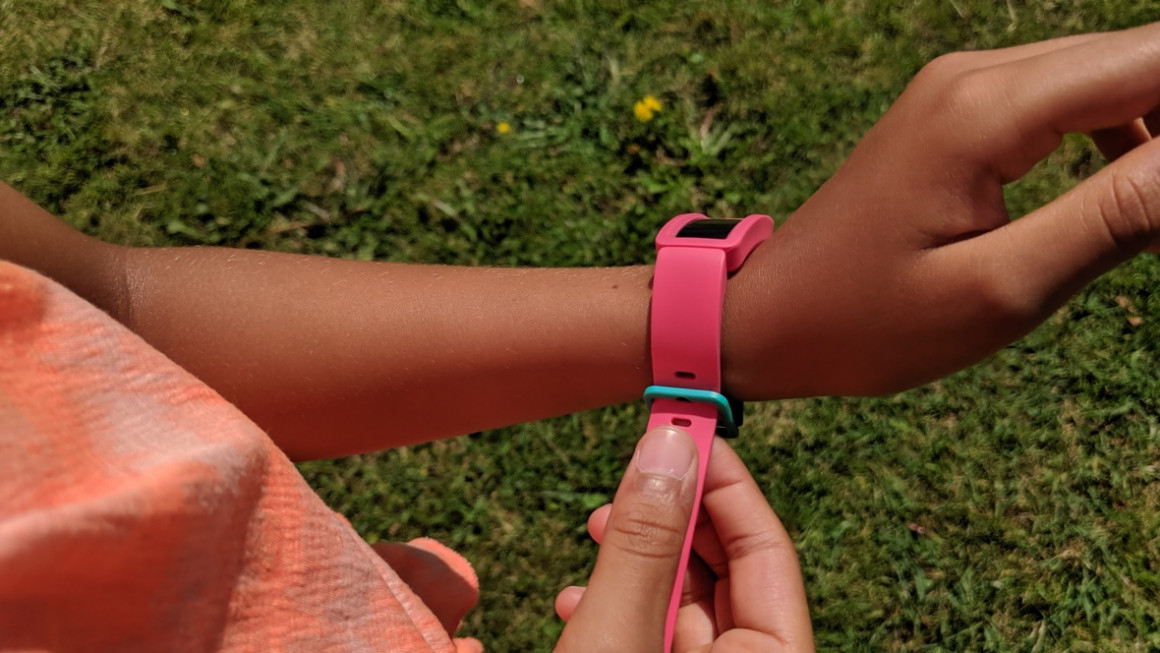 Unlike setting up a fitness tracker for yourself, there is invariably a bit more to it when you’re doing it for a child. You essentially have two options here: to pair the tracker to your child’s phone or to a parent’s phone. In this scenario, it was the latter, as my niece is still a long way off getting her own phone.

Like before, you’ll need the Fitbit app downloaded to your Android phone, iOS or Windows device. You’ll also need to set up a Family account before creating a child account, and assign a ‘Guardian’ for the accounts.

This time I got my sister-in-law to do the setup process on her phone, which she said took a considerable amount of time. If the parent has their own Fitbit, they’ll want to set up the ability to switch from their normal Fitbit app to the kid’s Ace 2, which has its own section. This requires a password in order to be able to switch back and forth between the two. 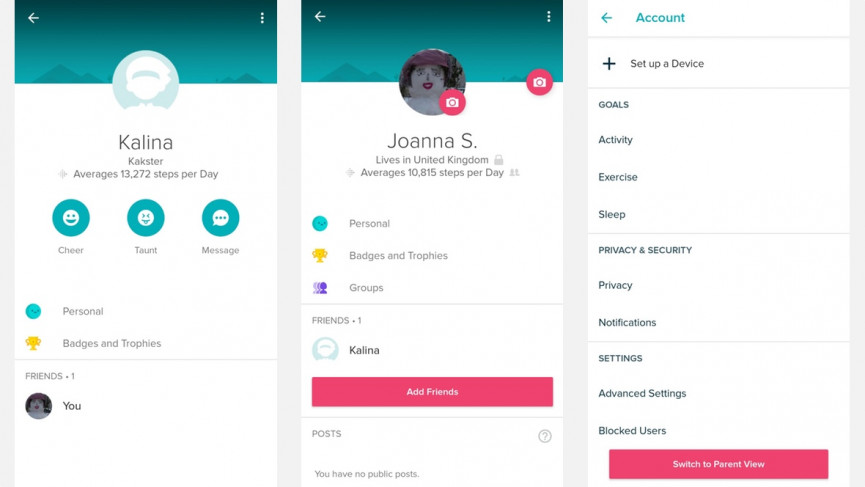 It’s worth noting though that the Ace 2 can save seven days of motion data and daily totals for the past 30 days if you don’t fancy the idea of syncing data every single day.

That scenario is made easier if your child has a phone and they can do that for themselves. It also unlocks the ability to view notifications for incoming calls, but the support doesn’t go any further than that.

On the privacy front, it’s more of the same as what we got with the first Ace. The Ace 2 is 100% compliant with all child privacy laws including the Children’s Online Privacy Act (COPPA). If you want to see that privacy information or read further, there are links within the Fitbit companion app to let you do that. 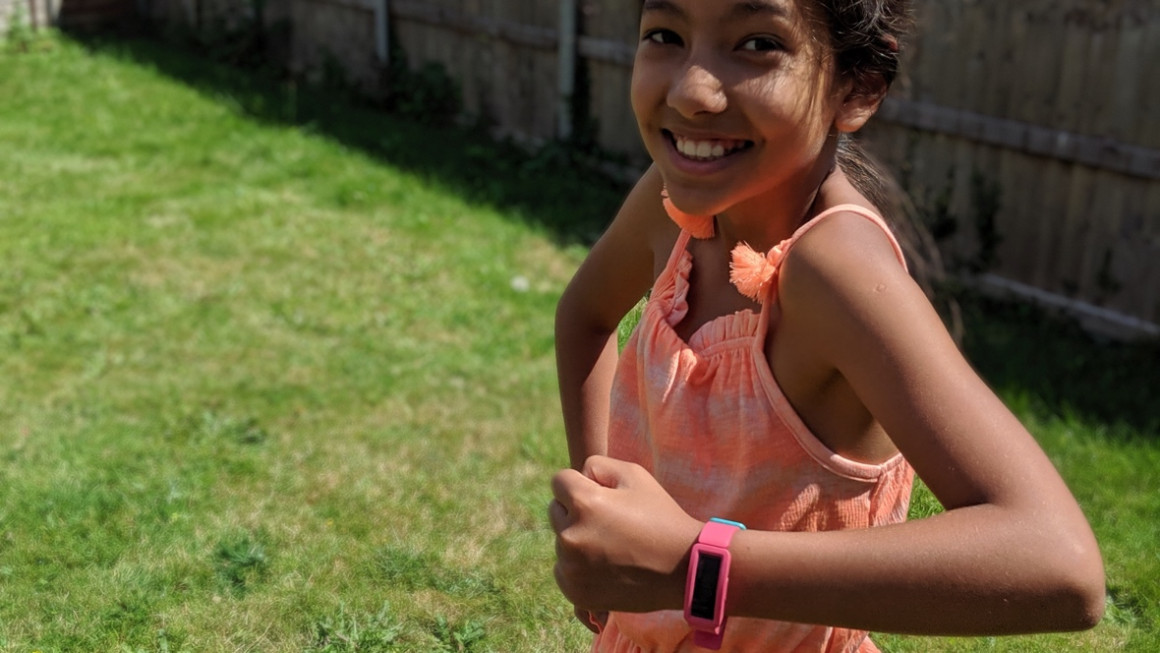 So, here’s a rundown of what the Ace 2 can actually track. There’s a 3-axis accelerometer on board that will track steps and active minutes. There’s also automatic sleep tracking. And that’s your lot. Exactly what you got on the first Ace.

The big difference is how the improved display and the more playful UI can make that information more absorbing and, hopefully, more motivating. You’re now getting rocket ships and cute monsters to help illustrate tracking progress. Little animated goal celebrations will accompany earned badges to mark those major milestones, making the whole process of exercising seem a little more fun.

Did my niece find those changes more motivating? The goal celebrations were certainly appreciated, mainly because she just loved boasting about how many steps she was getting in for the day. Fitbit strikes a good balance between fun and motivation, and while it could do more, the step tracking and the rewards alone seemed to have the desired impact here. 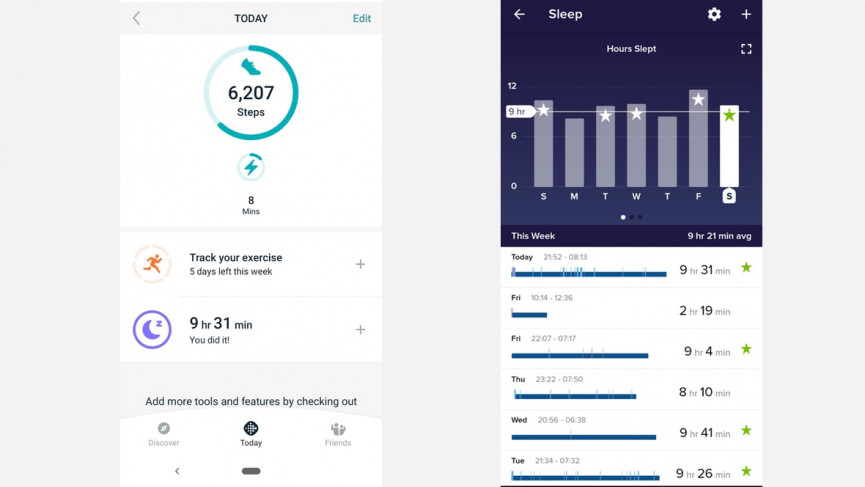 Accuracy was always going to be a tricky one to explore. Just like your standard fitness trackers, you’re relying on motion sensors to monitor progress being made by your feet. Then Fitbit’s algorithms kick in and try to hone the accuracy. I checked in on the data after an active day and the numbers didn’t appear wildly out of sync to my data, but the difference in activity and smaller steps was always likely to serve up different daily step scores.

Sleep tracking is on board again and it’ll use those motion sensors to automatically detect when you’ve fallen asleep, but you don’t have the heart rate sensor of other Fitbit devices to really hone in. In the morning, you’ll need to head into the Fitbit app where and log into the child account to see a breakdown of sleep duration, sleep quality and type of sleep.

The adult is in charge of deciding whether to set up additional sleep features like sleep schedules, setting reminders to go to sleep and adjusting sleep goals. With no heart rate monitor, you don’t get the more advanced sleep analysis you do get on adult Fitbit trackers. But if you want to know what a great night’s sleep looks like, take a look at a nine-year-old’s data.

It seems like Fitbit’s aim was to make some small and subtle software improvements that make its fitness tracker not necessarily better, but more appealing. On the whole it’s achieved that goal, but we’d definitely like to see something a bit more groundbreaking and innovative for the next Ace instalment.

Outside of tracking, the big new software feature is the ability to change up watch faces. To do that you’ll need to be inside of the Fitbit companion app where you get to pick from a collection of static and dynamic watch faces. It would nice to have that ability to do this from the device itself, although we also understand why Fitbit chose to tuck it away in the app.

Fitbit claims the Ace 2 is good for five days of battery life, same as the first Ace. That’s a couple of days off what the Inspire and Inspire HR trackers can offer in comparison.

Long term, battery life became an issue for my niece with the first Ace, and charging became a problem as she kept forgetting to put the tracker back on. The Ace 2 manages to achieve about the same amount of battery life. While core features remain largely the same, the animated watch faces will prompt more regular charging. We found that they tended to knock the battery life down to somewhere closer to 3-4 days.

When it does run out of power, you’re looking at around two hours to get it from 0-100%. Some adults might just have the patience to wait that long, but it might be slightly different for a child who just wants to get out and start tracking again. 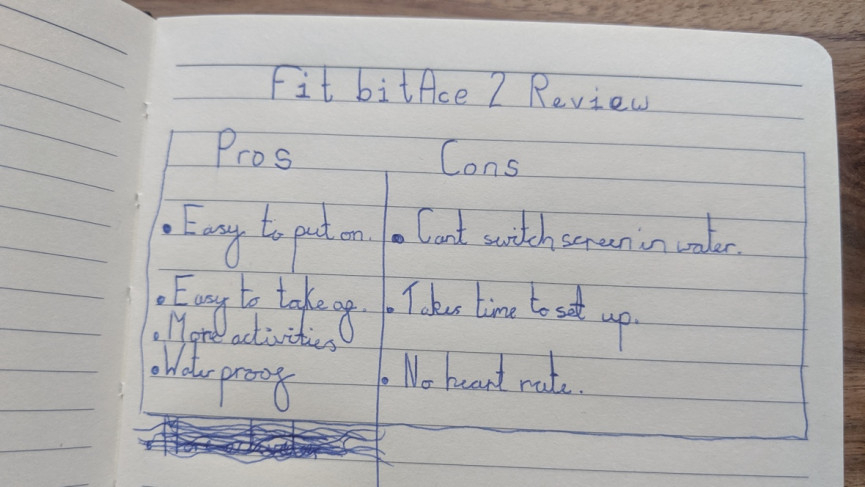 The Fitbit Ace 2 doesn’t break the mould for what a kids’ fitness tracker can do, but unlike its predecessor it puts everything into a more child-proof package. This feels like a tracker built for kids, but also one that has strong core features and the ability to adapt when Ace 2 owners get bored of the animations and want something more grown up. The price is better too, and if you want a kids’ fitness tracker that’s easy to use and will help keep them moving, this is still one of the best.