It’s finally official – we’ve been hearing rumors and whispers about the Apple Watch Series 5 for months, but Apple’s confirmed the facts at last – it’s coming on 20 September.

Whereas the Series 4 was a significant change for the Apple Watch in terms of design, the Series 5 is a much more gentle update. Still, Apple has shown off plenty of differences between the models.

We’ve gone through Apple’s big presentation with a fine-toothed comb for you, to give you an idea of some of the key differences between the Series 5 and Series 4. Read on to find out what’s changed. 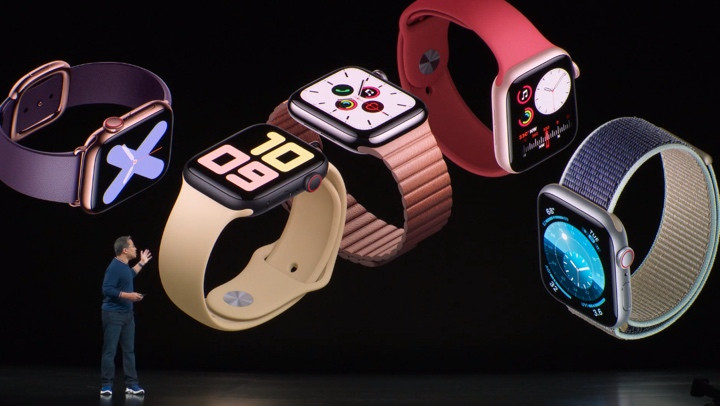 If there’s a key difference between the Series 5 and Series 4, it comes in the display – the Series 5 is the first Apple Watch to feature the option of an always-on display.

As far as the resolution on those screens goes, the Series 5 maintains the same retina display as the Series 4, as far Apple declared.

The Series 4 introduced a change to Apple’s digital crown, giving it haptic feedback and building electrodes into it to allow for ECG readings. These features return for the Series 5, along with that red ring to distinguish the models from the older Series 3.

On the Series 4, Apple also added a new W3 wireless chip and S4 system-on-a-chip to improve performance, and the Series 5 sticks with the exact same hardware. Storage for both models is therefore 16GB for all models rather than just the cellular models, and the accelerometer and gyroscope were improved, capable of detecting 32 g-forces.

In terms of other nitty-gritty details, both watches are available in 40mm and 44mm sizes, and both are water-resistant to 5ATM (50 metres).

That means if you’ve built up an enviable range of Apple Watch straps, have no fear – they’ll fit both the Series 5 and Series 4 alike.

Overall, the reality is that choosing between the Series 5 and Series 4 design feels like splitting hairs.

We loved the changes Apple made to the Series 4 when it released, updating the Apple Watch’s look without wholesale revolution. The Series 5 hasn’t changed too much, and looks great too. If design is your priority, we’d say either model makes a great pick.

Apple Watch Series 5 v Series 4: What can they do?

Because watchOS 6 is coming to both Apple Watch models, and the identical display sizing and shapes, the Series 5 and Series 4 have a fair number of shared features.

You can buy each in LTE cellular variants, and both have Apple Pay, automatic activity and sports tracking, built-in GPS, and an optical heart rate monitor with ECG monitoring and fall detection.

That means both models of the watch will have the potentially life-saving tech that has started to spread through the smartwatch market.

Sadly there’s no word of new watch faces coming to the Series 5. You’ll also get all the same watch face options, including the Infograph and Infograph Modular face that lets you cram all the complications you could want onto your watch face, which we’ve been enjoying on the Series 4.

On top of that, the same range of apps are available across both watches. One of the major additions to watchOS 6 is coming in the health department, as Apple goes even further in its commitment to health tracking.

A forthcoming app, Research, will allow users to opt in to providing data for ongoing health studies, and some of these will use your Apple Watch to harvest information.

One difference that Apple highlighted is available to users who purchase the Series 5 with a cellular plan and model – international emergency calling. This means that when you’re travelling, or at home, if your watch detects a hard fall followed by immobility, or if you choose to activate it, you can call the local emergency services right from your wrist, with no phone required at all. That’s something the Series 4 can’t match.

When it comes to location tracking itself, the Series 5 also has a small upgrade in the form of a built-in compass, which will help to improve tracking when you’re out and about.

It can let you see your elevation, latitude, longitude, heading, and incline, which could prove useful if you’re off the beaten track. Again, the Series 4 can’t say the same, although its location tracking has never let us down for everyday purposes. 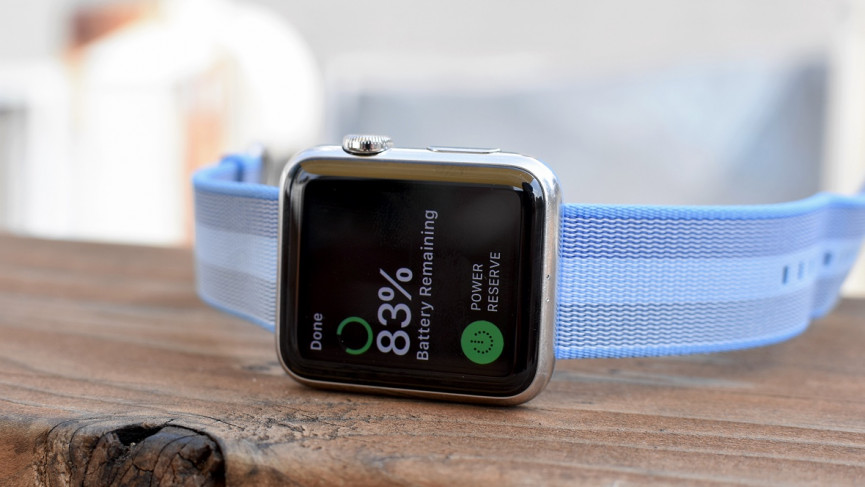 The Series 4 is still a beautiful watch, and made some improvements to the Series 3, but didn’t make a huge amount of progress on battery life at all.

It stuck to Apple’s one-day budget, with an estimated 18 hours of use. Well, surprise surprise, the Series 5 comes in with the exact same battery life.

With some careful use, and if you’re not constantly tracking huge runs and playing music, you should find it relatively easy to get through two days before you have to charge the Series 4, and we’d expect this to prove the same for the Series 5.

We’ll be putting it through it’s paces over the next few weeks, though, to double check. 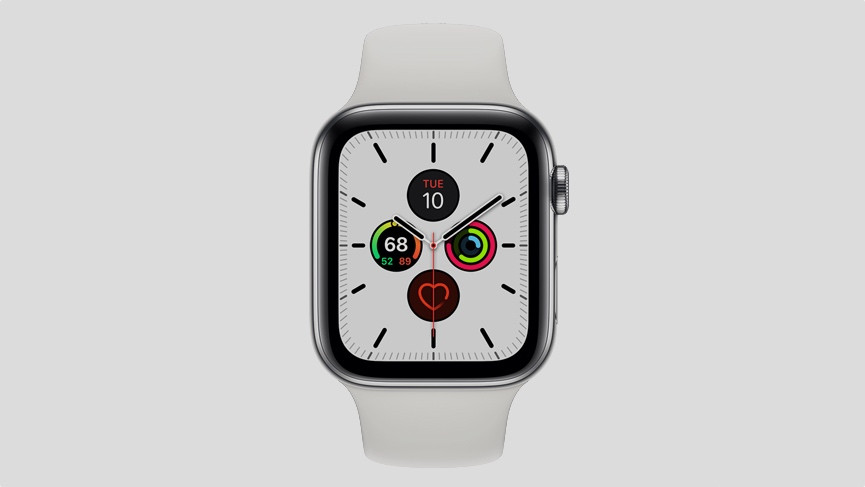 We know Apple, you know Apple – it’s become fairly accepted that when Apple iterates on its hardware you can expect a bit of a price hike.

Yet, in this case, they’ve resisted the lure. The Series 5 is available to pre-order now at a starting price of $399, the same price-point that the Series 4 launched at.

The Series 3 got a price cut as a result of the Series 5’s launch, down to $199, but no such announcement’s been made about the Series 4 yet. We don’t know whether it will live on any further.

Regardless of Apple’s official pricing, though, we expect Series 4 prices to fall as a result of its newfound position as an older version.

Still, because the Series 5 is such a recent announcement, and isn’t out quite yet, discounts haven’t really started to hit the Series 4 as of yet. You can still find the occasional great deal, but for now we’ll be keeping an eye to see if the balance shifts on this front.

Apple Watch Series 5 v Series 4: Which is right for you? 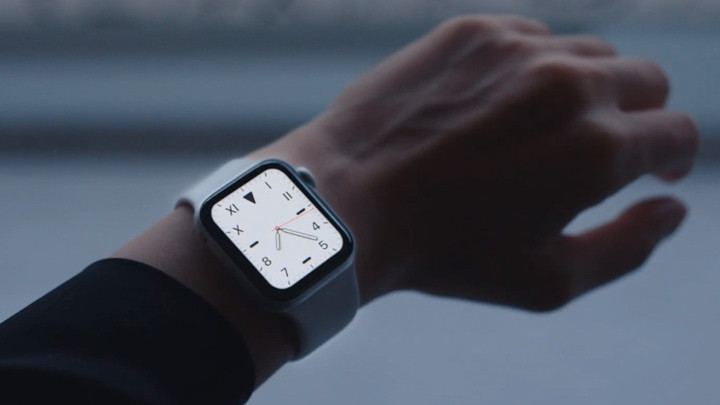 So soon after the announcement of the Series 5, the final judgement on which watch is better for you may come down to how important it is to you to have the latest and greatest on your watch.

If you’re an Apple devotee, then the Series 5 is attractive – it’ll last longer, and be Apple’s flagship smartwatch for at least another year.

On the other hand, if you’re a Series 3 user, or don’t have an Apple Watch at all, there’s a lot to be said for upgrading to the top model, rather than the admittedly-excellent older Series 4.

The Series 4 is a hell of watch, though – we named it our 2018 Smartwatch of the Year and overall Wearable of the Year, too.

We’ll see if the Series 5 can match it when we go hands-on for a review very soon, but in the meanwhile whichever model you decide to go with, you’ll be picking a winner.